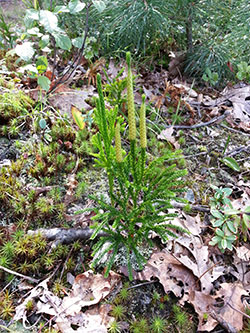 These plants look like pine trees, but in fact they are Lycopodia (singular Lycopodium), specifically Lycopodium obscurum, also known as Tree Clubmoss, Princess Pines or Running Cedars. They are a species of clubmoss, related to ferns.

Since Lycopodia are similar in appearance to pine seedlings, it can be hard telling them apart. Pine seedlings have bare brown stems, with clusters of green needles at the top. Lycopodia, on the other hand, have widely branched stems covered with scale-like leaves. Each tiny leaf is called a microphyll and has one unbranched vein. These plants grow where soil is somewhat dry, with lots of dead leaves.

Like all clubmosses and ferns, Lycopodia reproduce through spores rather than seeds, so they are usually near each other. Unlike Lycopodia, pine trees have seeds, which are blown away by the wind or transported by animals, and the trees are not as close to each other. Can you now distinguish between Lycopodia and pine seedlings?

Lycopodium is used as shelter and food for some animals such as the Red-Backed Salamander, found throughout the northeastern United States.

Lycopodium is traditionally used in Austrian medicine, as tea or compresses for treatments of external disorders such as of the locomotor system, skin, or liver. Also, it is used in homeopathy treatments for acute or chronic ailments like earaches or digestive disorders.

Spores from Lycopodia can be harvested and sold as Lycopodium powder. In the past, Lycopodium powder was used as flash powder or in fireworks and explosives, because of high fat content and large surface area per unit of volume. It is also highly hydrophobic; some say that if the surface of a glass of water is coated with the powder, you can stick your finger in and the finger will come out completely dry, but covered with the powder. People have also used Lycopodia as wreaths during holiday times.

In some states, Lycopodium is a protected plant. Although not rare in Massachusetts, these plants grow and spread slowly and are vulnerable to disturbance if overharvested.