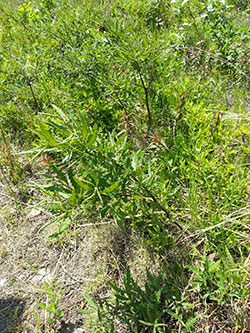 Sweetfern (Comptonia peregrina) can be found throughout the meadow and shrubland habitat under the power lines in the Landlocked Forest. It is native only to the eastern U.S. and southern parts of Quebec, Canada. Sweetfern prefers to grow in dry, acidic soil, and can be found near roads such as near the power line access road.

Averaging three feet tall, sweetfern has fern-like leaves but grows as a shrub with a woody stem. The leaves are eaten by the larvae of Lepidoptera species, that is, moths and butterflies. Thus, they are an important element in the ecosystem. People have made the leaves into tea, or crushed them and used them as a spice. Though easily identifiable by appearance, it may be even easier to identify by the smell the leaves give off when crushed or broken. (Try it! Break off a leaf and rub it between your fingers.) Their “sweet” smell gives them their name. Confusingly, they are not actually ferns; sweetfern has flowers and seeds, while ferns do not.

Flowers are found in late spring, growing in clusters called catkins. They are considered “imperfect” flowers because they do not have both a male and female part like most flowers.. Male and female flowers grow on the same plant, with male flowers as elongated brown catkins, and female flowers in small shortened ovals. Once pollinated later in summer, fruits develop as small oblong, greenish-brown, spiked balls that resemble budding pinecones. These tiny fruits are edible, although it is not recommended to eat anything found in the Landlocked Forest. Sweetfern also reproduces vegetatively from underground roots, which is why it is often found in dense patches.

Sweetfern is a nitrogen-fixing plant. That means it has the capability to take nitrogen from the air, convert it to a form the plant can use, and return it to the ground. Plants need nitrogen to grow, but most cannot get it from the air. Nitrogen-fixers have a symbiotic partnership with the Actinomycetes bacteria. The bacteria get nutrients and water from the plant's roots, and the plant is more robust because it can grow without additional nitrogen fertilizing the soil. This is why sweetfern can grow in nutrient-poor places like the side of a road or the sandy soil under the powerlines in the Landlocked Forest.