Clues to early Native American life still exist right here in Burlington and can be found in the Landlocked Forest. The fact that certain kinds of rock piles exist only in a few towns north of the Concord River would indicate that these formations are not just accidental in nature, but made by humans. Since the piles described here are significantly less prevalent in areas known for early farming and more common in areas used for orchards and pastures, they are probably not field-clearing piles from early farming. Why would a farmer move them so far? So the better question is: were they made by Native Americans, and why?

Split-wedged rock piles have been found in the Landlocked Forest. Those and other structures described here can possibly be found in Burlington, and most have only been found in the local area: Lexington, Billerica, Waltham, and Concord.

Split-wedged rock – A split rock with a separate “wedge” rock inside the split. Some think that Native Americans believed it was a door to the underworld, and the wedge was an offering or was used to hold it open so that spirits could pass through. Look along the Bannon Hill Trail Loop to find 2 or 3 examples! Examine them closely. How could they have been made? Why do you think they were made? Here’s one from the Landlocked Forest: 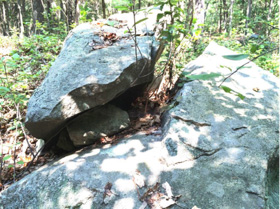 Other types of Native American Rock Piles found elsewhere are described below:

Outline Rocks – Stones placed on the ground to outline a burial site including a “head” rock, and two parallel side rows, or a full rectangle. Often one rock in the outline is quartz or white feldspar. White is used to signify wisdom and enlightenment. Often one stone is placed in the middle signifying a heart.

Oblong with quartz pile – oblong pile of 15-30 stones on the ground, including one or two quartz stones.

Unfortunately, since burial piles were directly on the ground, many may be covered by layers of dirt and leaves, and difficult to locate.

Seat – A semi-circle 3-4 feet in diameter, placed on top of a larger rock, and on high ground. The opening usually faces towards other rock structures, water, or a clear view of the sky.

Horizon pile – A rectangular pile with a level top near the top edge of a slope.

Platform pile - A rectangular pile with a level top along a slope. A retaining wall along the slope is used to build up the lower portion and level off the top.

Most horizon and platform piles face southwest overlooking water. Possible uses are for standing upon, or to mark events on the horizon.