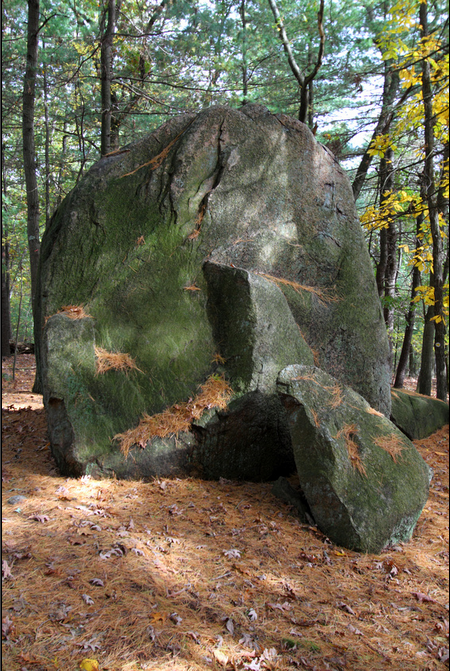 Glacial erratic boulders, or simply erratics, are rocks which are transported via glacial ice to distant geographical areas. These stones, ranging in size from pebbles to boulders, are picked up by the moving ice as it slides along the terrain and are later deposited hundreds of miles away as the glacier thaws and melts. The erratic boulder on Bannon Hill is over 15 feet (5 meters) tall! Erratic boulders contain a significantly different composition of minerals compared to the surrounding rock, due to the distance from their origin. Many glacial erratics discovered at the present are the result of the last ice age, during which massive glacial movements carried stone and sediment away from their mountainous origins, scattering them over other types of land forms.

Glacial erratics are typically formed by one of the following activities: abrasion, plucking, ice-thrusting, or spalling. In abrasion, the glacier scrapes along the valley bed, collecting sediment and polishing the underlying stone. With plucking, the ice cracks off large fragments of bedrock, resulting in larger erratics. Ice thrusting occurs when the glacier freezes to its bed and later surges forward, dragging sediment with it. With spalling, glacial ice freezes between layers of rock, expanding and eventually splitting the layer off entirely. Glacial erratic boulders can also be created by avalanches that fall onto the upper glacial surface and slowly sink through the glacier body, finally resting with the other debris on the earth. 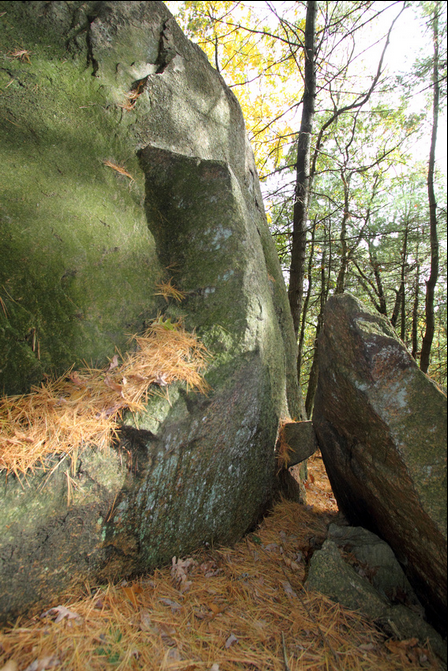 Glacial erratic boulders can be found hundreds, if not thousands, of miles away from their point of origin. Because of this movement, these wayward stones are useful for geologists seeking to uncover the history of the Earth and its topography. Using the erratic boulders, scientists can deduce when and where glaciers extended their reach. With this information, they can construct climate models of earlier points in Earth’s history. In addition to many smaller glacial erratics, several prominent local glacial erratic boulders are the Rollstone Boulder, Doane Rock, and Plymouth Rock, found in Fitchburg, Eastham, and Plymouth, respectively.