Edge habitats are one of the most diverse habitats in the planet. They can be the transition zone between two different types of natural habitats or, in the Burlington Landlocked Forest's case, they develop because there is a man-made clearing in a forest habitat. The edge habitat here was created and is maintained by the electric company, which keeps the land under the power lines clear of tall vegetation. 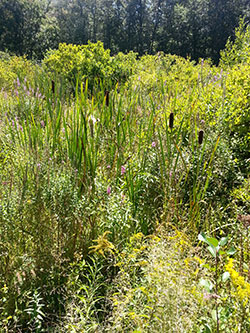 At first glance, this edge habitat implies that the human impact on the land has been very negative as it is disrupting the natural landscape. However, this is not necessarily the case. Forest edge habitats can act as early-successional habitat providing a space in which younger, less dominant vegetation, such as shrubs, wildflowers and grass, can thrive. Succession is the change in plant species over time that happens naturally, for example in response to a disturbance like a forest fire, and early-successional habitats are rare in Massachusetts. A wide array of vines, ferns, weeds, shrubs, and grass constitute most of the vegetation of a forest edge habitat, and can include both forest and meadow plants. These plants provide food and desirable nesting places.

Due to these benefits, many animals are attracted to forest edge habitats and congregate there. Various types of insects, including dragonflies and bees, are often spotted in this type of habitat. Chipmunks are also very prominent in this habitat. Bigger herbivores, like deer, will look in this habitat for food. Because it is a more open tract of land, predators,like the Red-Tailed Hawk, generally prefer to hunt in a forest edge habitat. Very rarely, Black Bears have been seen here in the edge at the Landlocked Forest.

Many songbirds, notably the Prairie Warbler, thrive in open areas and the forest edge habitat. Brown-headed Cowbirds will lay their eggs in other birds’ nests in this forest edge habitat. Indigo Buntings use the area and a pair was recently spotted going to and from their nest in a bush under the power lines in the Landlocked Forest.

In the end, edge habitats like the one produced by the power lines in the Landlocked Forest are not necessarily detrimental to the ecosystem or natural environment. Although clearing does have negative impacts, including fragmentation of the landscape and a decrease in contiguous interior habitat, the creation of edge habitat can be beneficial. Edge habitats increase diversity and species composition in an area and thus should be respected and maintained when appropriate.