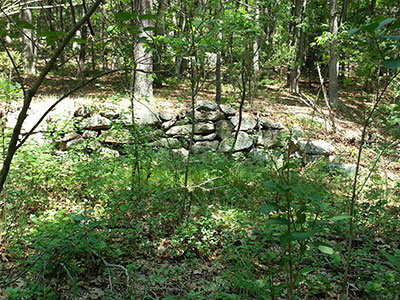 When Route 3 and Route 128 were built in the 20th century, all of the land in the Landlocked Forest was cut off from the rest of Burlington forever. In the time since, buildings in the area were abandoned, and all that remains are foundation ruins like this one here. We can't be certain what the ruins were, but we can make some educated guesses.

The trail in this part of the forest follows a man-made road, still visible by its flat surface and unnatural drop-offs to the side. Comparing maps of Burlington in the 1800s and present-day GPS maps, we can deduce that the road is the other half of Wheeler Road, which today dead-ends on the other side of Middlesex Turnpike.

A map of Burlington in 1875 shows that a man by the name of P. Harrington owned a house in this part of the town. Who was this Harrington fellow? The History of Burlington: 1640-1950, by Lotta Cavanagh Rice Dunham tells us that Peter Harrington built a house along Wheeler Road in 1865. The house was then bought by the Bannon family several years later. 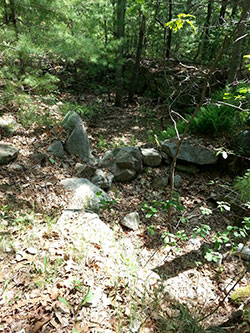 What is this “Print Works” located between their houses? Burlington: Part of a Greater Chronicle, by John E. Fogelberg, tells us of the Bannon Block Printing Factory, located on the Lexington border. It was a printing mill that operated from 1870 to 1893 and employed 21 families in town. According to Fogelberg, the place was abandoned before Route 3 was built and the factory was destroyed in a fire in 1920.

Could this humble ruin in the middle of the woods be the remains of the Bannon Block Printing Factory? Did Frank Bannon buy the house from Peter Harrington in 1880? Could it have been the home to Mrs. James Bannon, possibly widowed in 1890? Why did the factory close after 23 short years of business? What was it like to live here? Many questions still remain unanswered.