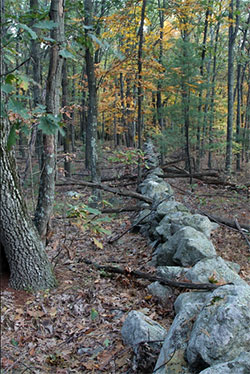 Stone walls appear throughout not only the Landlocked Forest, but also the rest of Burlington, and New England as well. It is inconclusive who exactly lived in this particular location, but the GPS map above gives is an idea of where property lines may have once been.

Walls such as these found in the Landlocked Forest were build by farmers in the late 1700s. They were used to border property, fields for crops or animals, and were also built along roads. Since they are rather short, and sometimes haphazardly placed, they were never intended for defense or keeping animals contained; they were meant to be a visual indicator. Sometimes, the walls were simply a way for farmers to get rid of stones they dug up while plowing or digging in their fields. It is interesting to think how long it must have taken for the farmers to lift each stone into place.

The walls serve as a reminder of the area's history and how young the forest actually is. Before any of these trees grew, parts of the Landlocked Forest were actually cleared farms, as was much of Burlington until very recently in the 1960s, when Rt. 128 brought industry and corporations to the town. What do you think Burlington was like back when it was still mostly agricultural? 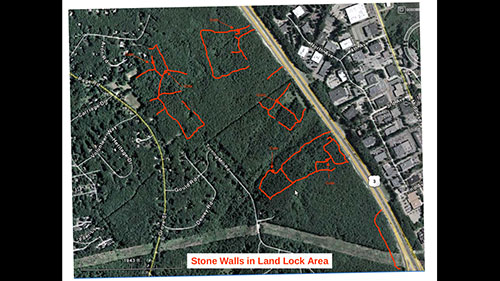