Huckleberry is a well-known name, thanks to its use in jams and pies, but is not as easily identified. Several plants are known as Huckleberries, but the Huckleberries growing in the Landlocked Forest are of the genus Gaylussacia. Most of the bushes on Bannon Hill are Huckleberry bushes. In fact, throughout all of the upland areas of the Landlocked Forest, Huckleberry and Low-bush Blueberry bushes make up much of the undergrowth. They are relatively short, growing in large semi-shaded areas. The berries are a dark blackish-purple with a rather shiny skin. Since Huckleberries are an important food source for many animals in the forest, including birds, small mammals, and even bears, it is best for people to refrain from eating them. 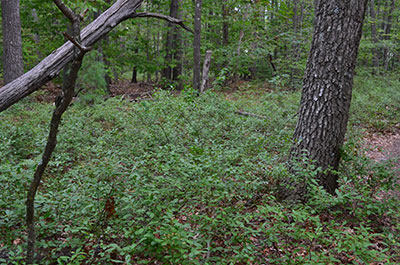 Huckleberry bushes are extremely similar in appearance to Low-bush Blueberry bushes. There are also multiple species of both, making it even harder to tell them apart by appearance alone. Both are in the Heath family and have similar sized leaves with smooth edges, and small, urn-shaped flowers. Their main identification point is their berries, but as both are edible, it is hard to go wrong in a survival situation. Huckleberries tend to be darker in color than blueberries, almost black, and have a different taste. Blueberries are of the genus Vaccinium, being “true” berries, while Huckleberries are technically “drupes” like olives and cherries.

Another difference that can help with identification is the presence of yellow-gold resin dots on the undersides of Huckleberry leaves, which are absent from Blueberry leaves. These dots can be seen with a hand lens, or even easier, rubbing the leaf underside on white paper will leave a faint yellow impression on the paper!